TCTC Group Band will once again be our hosts for the 2020 Preview Event to be held at the Ruskin Community High School. The event admission is free and details are below.

On Saturday 31st August 2019 the band will be holding a Quiz Night and Raffle at St. Mary's Parish Centre in Congleton. Proceeds from the event will be split between the band, to help cover costs associated with competing at this year's National Finals, and the Caudwell Children Charity.

Caudwell Children transforms the lives of disabled children across the UK. This amazing organisation acts as a safety net for families who are unable to gain the help they need.

Event organiser and band percussionist, Katharine Slater is seeking donations of raffle prizes. Anyone with prizes to donate can contact bandmanager@rodehallband.org.uk

The Band would like to thank the following organisations who have already supported our event with raffle prizes:

Rode Hall Silver Band took part in the NWABBA Buxton Brass Band Festival on the 28th April 2019.   The event was an own choice test piece contest and was held in the newly refurbished Octagon Theatre which provided a fantastic acoustic for the event. The order of play for the bands had been pre-drawn and Rode Hall Silver opened proceedings at 10:30am by playing the National Anthem as is traditional at all brass band contests in the UK. The band then went on to play it's chosen test piece for the 4th Section, 'Music for a Festival' by Philip Sparke. Competition from the other bands was strong and adjudicator Mike Kilroy commented on the quality and ambition of all the performances. The band were delighted to be placed 1st overall and also won the prize for the highest placed NWABBA band.

Rode Hall Silver Band marked a significant milestone in its 182 year history this weekend at the North West Area Regional Brass Band Contest in Blackpool. The band travelled to the Winter Gardens confident that the hours of preparation under conductor Nigel Butler would secure the result required to push the band into the third section.

For the first time ever, the band will promoted into the third section and the second place prize also secures an invitation to the National Finals to be held at Cheltenham Racecourse on the 14th September 2019.

The committee would sincerely like to thank our conductor, Nigel Butler and all the players for the hard work and committment over recent months that has enabled such great progress.

The band returned to the De Montfort School on the 3rd of November after 4th Section success last year. This year the band entered both the 3rd and 4th section competitions and our results are as follows:

The band traveled to Saddleworth once again this year to take part in the Whit Friday contests on the 25th May. Heavy Bank Holiday traffic coupled with extensive roadworks meant that the journey took a little longer than usual. However, the band arrived for their first contest at Scouthead at just before 5pm. The weather was wet and windy and the players thought that the first performance went well considering the conditions. So well in fact that the band achieved the top placing for a fourth section band!

Moving on from Scouthead, the band then played at Delph and Dobcross, putting in solid performances under steady rainfall. On leaving Dobcross to head to the next contest at Uppermill, band members at the rear of the coach noticed the smell of smoke. The driver pulled over (conveniently outside The Commercial pub) as he entered Uppermill. It was fairly clear on inspection that this was the final stop that this particular coach would be making! Fortunately, the band were well within walking distance of the contest at Uppermill and so were able to register and compete in what could have been, and turned out to be, the last contest. As such, the band focused hard and made its last performance count, resulting in another top fourth section placing.

Although players had fingers crossed that a replacement bus would arrive in time to make another contest or two, it wasn't to be, and the band enjoyed the opportunity to socialise, take refreshments and absorb the... rather lively... Uppermill atmosphere!

Even though the day's playing was curtailed, the band are delighted with the performances and results achieved and would like to thank MD Nigel Butler for all the hard work preparing the band for this year's event.

Photographs from the night can be found in our Gallery.

Rode Hall Silver Band are pleased to once again be appearing at the 2018 MMU Brass United preview evening, hosted by the TCTC Group Band. We encourage our local supporters to come along and hear our test piece, World Tour by Rodney Newton, as well as performances of test pieces from each of the other sections.

The event starts at 7:00pm on 17th February at the MMU Crewe Campus.

Rode Hall Silver Band are looking forward to joining forces with Biddulph Male Voice Choir on the 9th December to present a Christmas Celebration Concert at Kidsgrove Town Hall. Tickets are available for £10 from the Victoria Tap Room, Kidsgrove, or from Congleton Tourist Information Office, or by emailing tickets@biddulphmvchoir.co.uk. 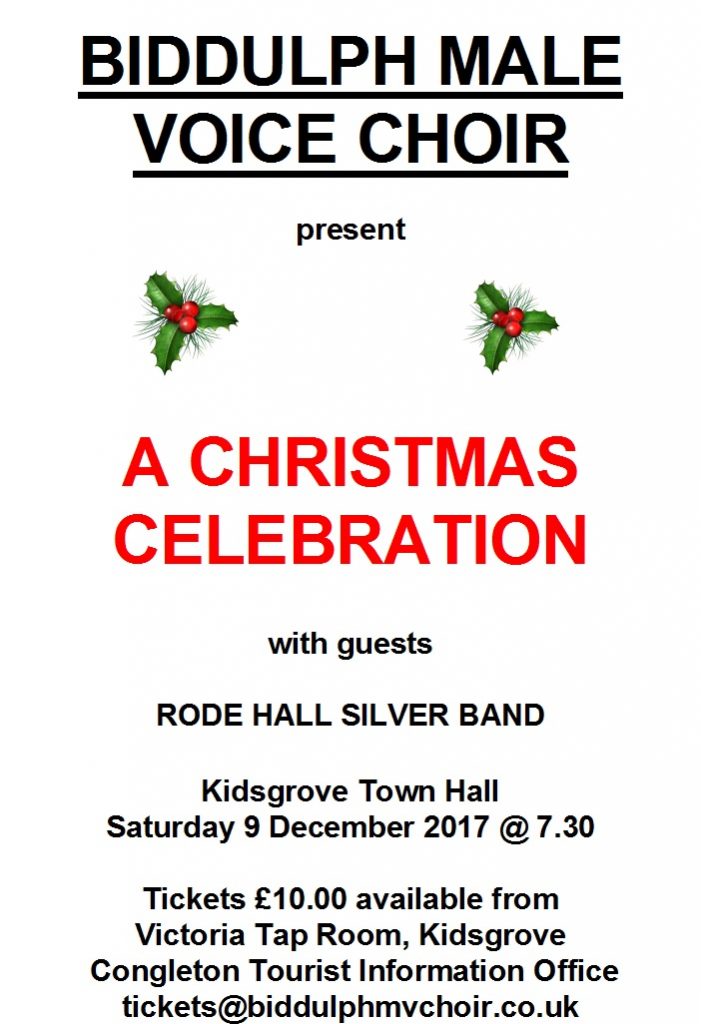